Skiing and snowboarding are among the most adored winter activities for Vancouverites, whether they are looking to pop up to a local hill for a few after-work laps or make a road trip for a weekend filled with glorious powder. There are plenty of options to choose from, depending on the type of adventure in mind.

This is the city that hosted the 2010 Winter Olympic Games. Ski and snowboard events were held on Whistler Mountain and Cypress Mountain-two mountains that we've included in our list of must-ski areas in and around Vancouver.

Whether you're after a rustic resort with plenty of character or a world-class destination resort that draws visitors from around the globe, you're sure to find exactly what you're looking for with our list of the best ski resorts near Vancouver. 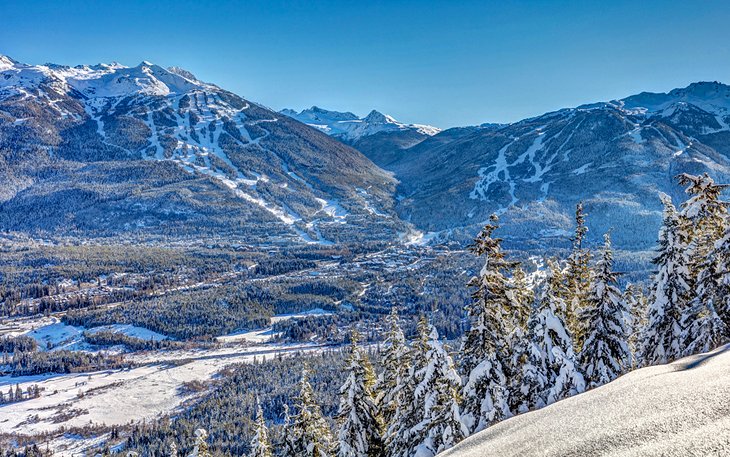 Perhaps the best known resort in the Vancouver area-and arguably in all of Canada, or even North America-is Whistler Blackcomb. With two mountains: Whistler Mountain and Blackcomb Mountain, you could spend an entire season skiing and still not hit each of the 200 runs. If you're after epic, world-class skiing, then Whistler Blackcomb is the perfect resort for you.

Whatever type of terrain you like best-from vast bowls and steep chutes to mellow groomers and technical terrain parks-you will find plenty of it in Whistler. Variety is the name of the game, and with 8,171 acres of terrain to explore, it's safe to say you won't get bored.

Whistler Blackcomb offers an amazing ski school program-and it's not just for first-timers (although they do have lessons for beginners). From steep ski clinics and women's only ski camps to programs that allow you to ski with Olympic athletes, the classes are a great way to have an experienced local show you the best spots on the mountain.

Although Whistler is undoubtedly known for its skiing and snowboarding, they're only the tip of the iceberg in terms of activities and attractions of the Whistler area. Plan to stay for as long as you can for a chance to try dog-sledding, ziplining, snowmobiling, bungee jumping, and more activities. 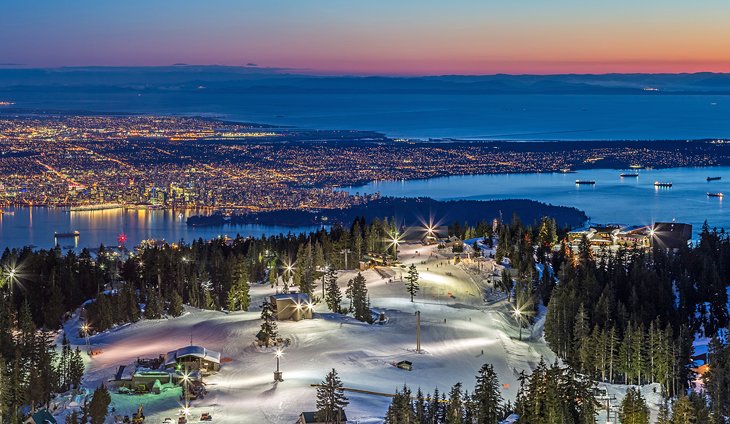 Grouse Mountain in North Vancouver is a fantastic option for those who want to get to snow as quickly as possible (12.5 kilometers from downtown Vancouver).

A quick gondola ride from the base of the mountain will get you right into the heart of the action: 33 runs, four different chairlifts, and six terrain parks, clocking at 1,200 meters above sea level.

Though it has a dedicated beginner area, most of the mountain's trails are a mix of blue and black runs, making it a perfect choice for those with a bit of experience under their belt who are looking for a quick snow fix without straying too far from the city.

One of the best features of Grouse Mountain's ski area is the fact that it stays open for night skiing. When the sun goes down-and in the winter months in Vancouver, that can be pretty early-15 different runs remain open and well-lit until 10pm.

Standing on the snowy slopes of Grouse and looking out onto the city lights below is one of those special moments that takes your breath away. You won't get a better view of Vancouver from anywhere else.

Where to Stay: Grouse Mountain is so incredibly close to Vancouver that you can easily stay right in downtown Vancouver and still fit in plenty of skiing.

The heritage St Clair Hotel-Hostel on the the heart is close to Canada Place where you can take the free shuttle up to the mountain. 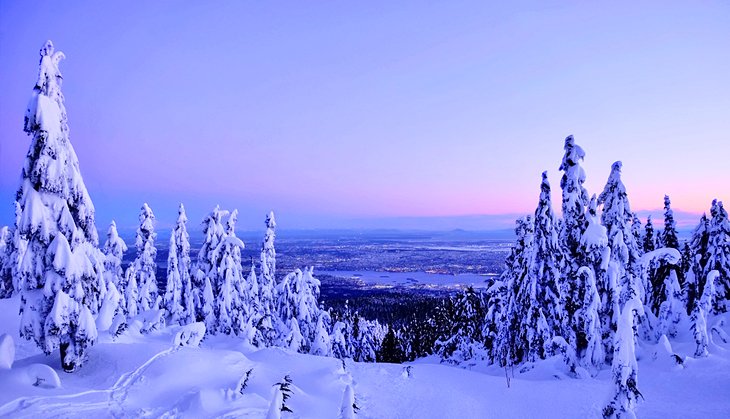 If you covet even more terrain but want to stick close to Vancouver, look no further than Cypress Mountain. It's a little farther from the city, 30 minutes away from downtown. Tucked away just past West Vancouver and up a winding mountain road, Cypress feels like a winter wonderland after a fresh snowfall.

The Cypress ski area spans three mountains: Mount Strachan, Black Mountain, and Hollyburn Mountain, featuring 53 ski runs over 600 acres of terrain, all accessed through a series of six chair-lifts. If you want a variety of terrain while sticking close to Vancouver, this is where you'll want to head.

Night skiing is available on select runs at Cypress until 10pm. If you decide to switch things up, the resort also offers cross-country skiing, snowshoeing trails, and snow tubing.

Where to Stay: The St Clair Hotel-Hostel is a 5-minute walk from Granville and Waterfront Sky Train Stations. Located in the heart of Downtown Vancouver, between Canada Place and Gastown areas. Close to public transportation (bus, seabus, seaplanes, and Skytrain) shops like Pacific Center Mall, locals, and restaurants, entertainment, and main tourist attractions. 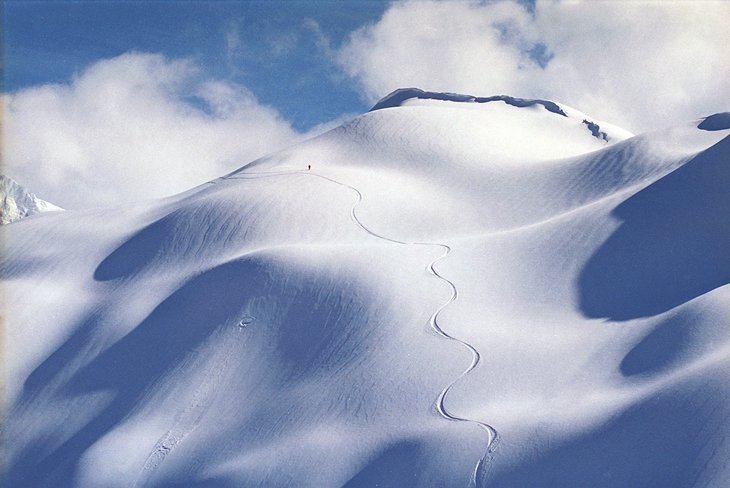 Mt. Baker isn't actually in British Columbia-or even Canada-but you're sure to find plenty of Vancouverites at this ski resort just south of the border in Washington State. It's a favorite option for those looking for seriously good skiing with an unpretentious atmosphere.

Mt Baker has of a rustic cabin-in-the-woods feel to it. The ski terrain, accessed by eight chairlifts and two handle tows, is fantastic, particularly for more experienced skiers who are comfortable skiing blues, blacks, and beyond.

Mt. Baker has a homegrown, grassroots vibe, perhaps best evidenced by the Mt. Baker Banked Slalom, a snowboard slalom race that brings out locals and snowboarding pros alike every February. 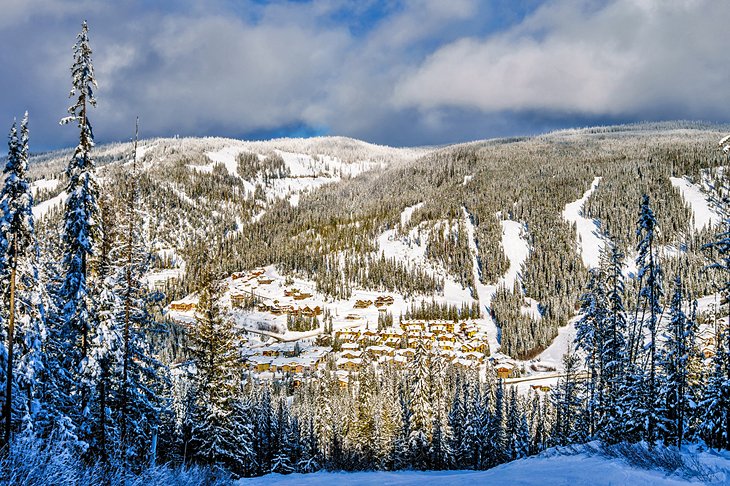 Sun Peaks Resort is worth the road trip (or if you'd rather skip driving in winter conditions, you can catch a quick flight from Vancouver to Kamloops). It's got everything the bigger ski resorts in North America have-the terrain (4,270 acres worth), the full mountain access (13 chairlifts), the snow - generally light, powdery, and all around glorious. Without the crowds.

While some of the bigger name resorts get tracked out quickly after a fresh snowfall, it isn't unusual to find untouched powder stashes days after a storm at Sun Peaks. That means you can enjoy a bit of a sleep in and a cup of coffee before heading up the mountain, rather than waiting in long lines to nab fresh tracks.

Sun Peaks consists of three adjacent mountain areas: Tod, Sundance, and Morrisey. Sundance offers lots of beginner-friendly terrain, while Morrisey offers plenty of blue runs for intermediate skiers. Mount Tod boasts the most elevation and a variety of runs for all abilities. Allow yourself at least a couple of days at Sun Peaks to get a feel for all three. 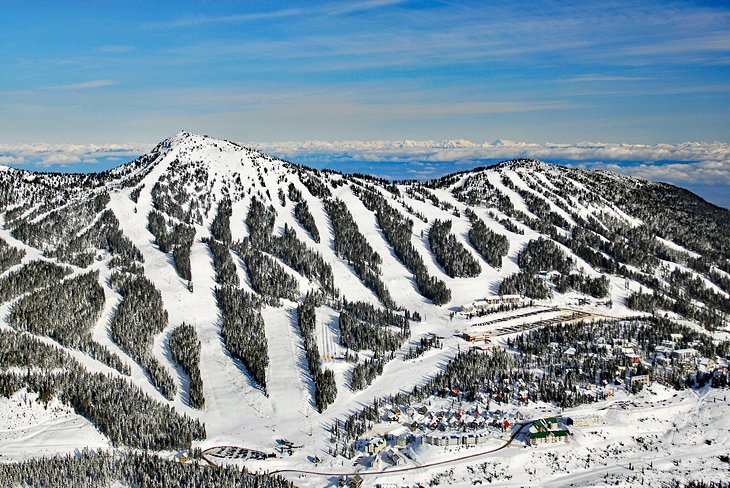 Got skis and willing to travel a little further afield from Vancouver? Hop on a ferry and cross the Strait of Georgia to Vancouver Island, then make your way up towards Mount Washington (which, despite its name, is not located in Washington State).

Vancouver Island is well worth a trip in its own right, with beautiful towns and cities to explore like Victoria and Tofino. Mount Washington is the crown jewel that attracts skiers and snowboarders to the area.

The vastly underrated Mount Washington gets some of the biggest dumps of snow anywhere in North America, with an average annual snowfall of 11 meters.

While there is snow in abundance, one thing that is lacking is the crowds. Lift lines are typically minimal or non-existent, and at times, you'll feel like you have the place to yourself.

How to practice social distancing?